It’s a rare thing when a movie is able to sneak up on me, suddenly tearing its way into my brain for, well, ever. But then Magnolia is a rare film.

The first time I watched this treasure I was sure I hated it. I wasn’t even fully in, only a few key players had been introduced so far, and I was absolutely convinced that I hated this film. As with all hated movies, though, I would stick it out. Magnolia sensed my weakness, testing my strengths to quite literally the breaking point with Tom Cruise’s first “Seduce and Destroy” speech, and then abruptly clobbered me over the head with how overwhelmingly great it is. The movie did, that is, not “Seduce and Destroy” — though making your bile rise in response to Cruise’s character was most likely a calculated move on the director’s part.

But I’m getting ahead of myself.

How exactly is such a troublesome, complicated thing like Magnolia capable of being so brilliantly amazing? What it comes down to is, basically, the unexpected.

This movie deals in the unexpected: unexpected moments, unexpected insights, and unexpectedly complex characters. These all come together and ultimately save the movie from itself. The writing is pretty unique, too.

So, obviously, I would be a fool to leave out the fact that it rains frogs. Very big frogs, falling from the sky, breaking teeth and causing botched (and then successful) suicide attempts. A frog shower of epic proportions. It’s great.

However, believe it or not, the froggy weather is only one piece of what helps the film catch you off guard. As I mentioned, on first watch I went in with every fiber and assumption of my film-drenched brain telling me I would hate Magnolia. I feel it may be fair to assume this is/was a sentiment felt by many others back in 1999, sitting in a theater and feeling (probably) very confused. For those that stuck around (apparently, many audience members left the theater during Magnolia‘s sing-along scene), they, like me, were met with this unexpected jolt of understanding.

This is the moment where you as the viewer go, wait a second, this is a really good movie, isn’t it?

Every preconceived notion of what makes something a “good movie” is clobbered by Magnolia‘s neverending multitude of plots, varied and competingly dynamic protagonists (who are never exactly “likable”), and its ambitious story structure.

Naturally, the ensemble cast helps ease you into this realization that Magnolia is a good movie, with Julianne Moore, William H. Macy, Philip Seymour Hoffman, John C. Reilly, and (of course) Tom Cruise making up the meat of the story. The film boasts a good number of other standout cast members who would probably matter more to me were I not born in 1996.

Each actor brings their own electrifying current to the many tangled strings of Magnolia‘s story structure; Hoffman offering a more tense and hushed spark next to Moore’s blazing, hectic one, for example. They offer unexpected projection’s of their characters, while the connections between each protagonist startle us as the audience with each reveal.

Claudia’s predatory (and now dying) father is a game show host for a popular children’s competition, the same one “Quiz Kid Donnie Smith” (Macy) won back in his boyhood days — before his parents claimed his winnings as their own. His melancholy musings are interspersed with a young boy currently dealing with the price of childhood fame, on the very same game show hosted by Claudia’s very same father. Now, this game show is produced, as we see in its credits, by Earl Partridge Productions. The very same Earl Partridge lies in bed at home, dying and weak with cancer, as Hoffman’s nurse Phil Parma desperately tries to fulfill the old man’s dying wish. And Earl’s wish? To see his estranged son one last time. Earl’s son, as we find out toward’s the film’s climax, is the infamous Frank TJ Mackey (Tom Cruise), who runs an extremely problematic “self-help” program for men. Earl’s young wife (Moore), however, does not under any circumstances want Frank found and brought to her dying husband. She is an erratic druggie who (towards the conclusion) passes out in her car, only to be found by a little kid — a kid we see earlier in the film giving a cryptic witness statement to a cop in the form of a rap song. This same cop was called to the coke-fiend Claudia’s apartment early in Magnolia, when and where he promptly fell in love with her. Round and round they go.

That recap doesn’t even come close to doing the story justice, of course.

Besides the numerous Biblical influences (which I’ve never had much interest in dissecting, as I have no religious knowledge nor background; the characters have always been what interest me most) Magnolia also features interesting parallels between its linked protagonists. There are two older men, both dying of cancer (game show host Jimmy Gator and fat cat Earl Partridge).

There are also two men named Jim, the cop and the father, who hold a significant place in Claudia’s life — though one has ruined her while the other may yet have a chance to save her. There are absent or failed father figures everywhere, as well: the young quiz show champion’s caustic dad, Donnie’s poaching father (and mother), the pedophile Jimmy Gator, and of course Earl Partridge. This makes Frank a reflection of Claudia, and Donnie obviously a reflection of the young boy. 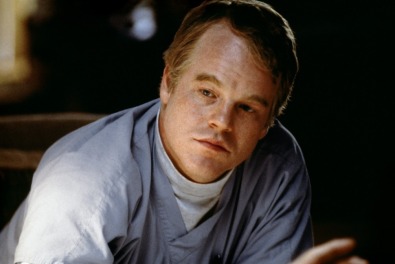 And everyone — absolutely everyone — is unsurmountably lonely. Loneliness is as much a theme in Magnolia as the unexpected, when it comes down to it.

What could easily become a tangled mess of different lives is instead turned into en epic ensemble in director Paul Thomas Anderson’s (There Will Be Blood, Boogie Nights) capable hands. And, of course, the whole smörgåsbord is perfectly wrapped up in Aimee Mann’s superior soundtrack. It made me an Aimee Mann fan, that’s for sure.

Enough dissection and appreciation — please do yourself a favor and watch this film if you haven’t yet (and if it’s all new to you, I hope you didn’t read my spoilers — then again it is about 19 years old). 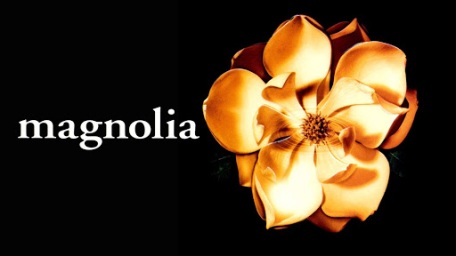 Do you think Magnolia is a hot mess, or perfect — or both? What is your favorite film from the year 1999?

One thought on “‘Magnolia’ Film Review”