Today’s horror film is a personal favorite of mine, and by far the scariest vampire film I believe has been made in a long time 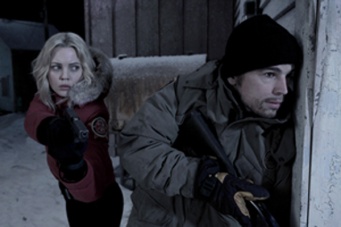 Based on a highly successful comic book miniseries, 30 Days of Night is honestly one of the most original and sinister vampire films I have ever seen. The character/creature design is in itself arresting, with the bloodthirsty antagonists of the already visually striking film being very shark-like in appearance. They aren’t glamorous and fastidious like the Stoker nightmares we’ve grown used to, but instead let the blood of their victims dry all over their faces and bodies, growing more and more grotesque as the film (and carnage) continues. It doesn’t help that it’s a pretty hopeless movie, with basically no one in the little Alaskan town being safe from the indiscriminate killings. This hopeless vibe, along with the uniquely spooky look of the vampires, are what make 30 Days of Night such an uncomfortable and scary viewing experience for me. 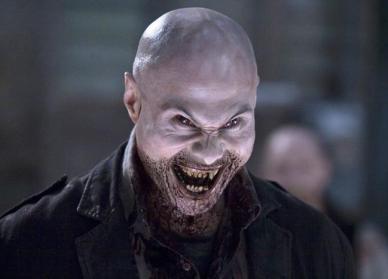 Critical reviews of the film were much more varied, and not as enamored as my own, with the movie earning a 51% Rotten Tomatoes score and Metacritic score of 53. There were two sequels of sorts, neither of which were anything to write home about. But I firmly believe this first film is something special, and should be required viewing for any vampire nuts out there.